I finished college (at least the first round of it) in 1985. In my last two years, a large group of lefties, artists and other rabble had gelled, and had begun socializing, drinking, dating, etc. on a regular basis. Right after I graduated, three of these guys rented an apartment in a big house in our college town and dubbed their home The Wave of Plague. It was an instant success-- it became the main party house amongst the crowd I'd run with. Since I had graduated and moved back to Chicago, I had to content myself with drunken phone calls during their parties telling me what a good time they were having.

One day, my friend Dan, one of the Wave's occupants, walked out his front door to see that the neighborhood drunk was lying face down on his front lawn. At first he assumed that the guy had passed out. He checked on him and realized that he had gone to that great tavern in the sky.

Dan apparently went into shock, because he remembers nothing about the next hour; his friends and roommates filled in the missing events for me.

In the meantime, someone in one of the other apartments had ordered a pizza from Dominoes. As they stood around him, the Domino's guy showed up.

"Who ordered a pizza"

Someone pointed to the dead guy. "He did."

The Domino's guy unwisely went and checked on the dead guy, assuming he was drunk. He pulled him over, looked at him and exclaimed-- "Hey, this dude ain't drunk-- he's DEAD!"

At this moment, the police pulled up, followed by an ambulance. Since he had touched the dead guy, the deliveryman was now a witness and was detained for an hour or so. He was not able to make several pizza deliveries.

Domino's was unforgiving; the Wave of Plague found itself unable to get Domino's to deliver for the rest of the year.

Eventually, the police questioned everybody, set down the body outline in white tape and the meat wagon hauled him away. Everybody went inside and cracked beers and cracked wise on finding the dead guy on the lawn.

Dan, in the meantime, had come out of his haze and began castigating them for making fun of the situation. Everybody went silent, ridden with guilt. That is, until Dan walked over to the stereo and dropped the needle on Jim Carroll's "People Who Died." He had to run for his life.

The next morning, the guys in the Wave of Plague awoke to find that someone had taped x's on the eyes of the tape outline. 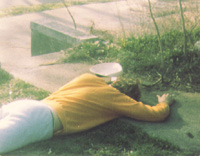 A few months later, I went down to visit my friends at the wave. For my benefit, Dan reenacted the discovery of the dead guy on his lawn.

There was one more hijink. My friend Darin, who lived nearby, had made a sculpture on his front lawn protesting the Stalinesque policies of Murray Choate, the mayor of our college town. The statue depicted Choate ascending a staircase, with the first step Charleston, Illinois and the top step the world. Since the sculpture was primarily made of junk, the neighbors, led by the dead guy's wife, brought the law in to get rid of the sculpture.

One night, years later, a bunch of fellow Eastern grads and one of my friends who worked at the town newspaper were discussing the whole thing. My friend who worked on the paper told us an unbelievable story about someone who had written a letter to the editor exorciating this woman, saying that she had a lot of nerve to complain about other people's garbage when she'd left her dead husband on someone else's lawn.

It had a familiar ring to it, and then it slowly occurred to me that my friend Tim, who'd graduated at the same time as I had, and I had typed it up one beer-sodden evening under a fictitious name and mailed it.

WHy do I think you're not really ashamed?

I've never laughed this hard at the dead in my life.

Dale-
Wait 'til you hear about my former mother-in-law and the dead neighbors.

Wait, we wrote that letter? That sounds vaguely familiar ...

Tim- Yeah, there's a lot of "vaguely familiar" back in those days, isn't there?

Remember, it was at my aunt's house in Beverly?

I was thinking about your daughters-- their love of the word "kerfuffle." There's a blog called "Soul Kerfufflle."

THAT is hysterical!!!! you are a rye-rye squared.

See, now this is what the world needs more of--FUNNY stories about dead people. Thank you.

The loss of Domino's convenience was most assuredly the bitterest pill, I'm sure.

Yasamin told me to tell you she loved your story but was having commenting problems. Blogger problems I mean, she know how to comment, she just couldn't. Clear as mud? Good.

I wanna hang with you and your friends, Johnny Yen.