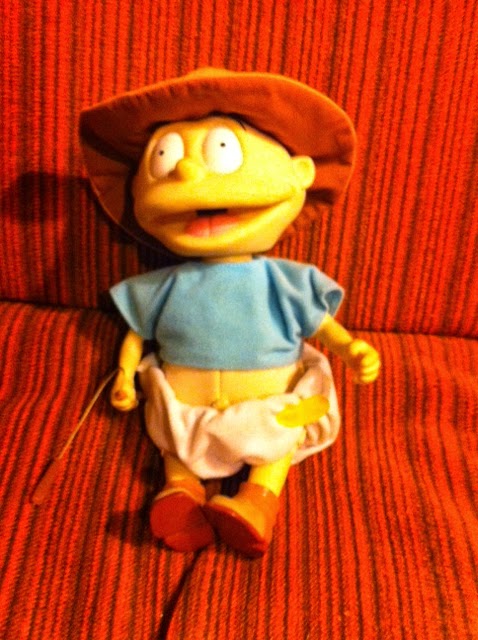 Recently, my son started his junior year of college. In March, he'll turn 21. My days these days are filled with working overtime in order to pay for that college. A few weeks ago, though, I took a day off to rummage through my attic storage space to thin out stuff that didn't get thinned out during our move to a bigger apartment a few years ago. I came across a reminder of another time and place.

In 1998, I had just finished two things: my elementary education teaching certificate and an ugly custody fight with an ex-girlfriend over my son. Neither were cheap.

My ex and I had fought to a bitter standstill. We shared custody, but as is the custom in the state I live in, I ended up paying child support.

Those days, in early 1998, were some lean times, to put it mildly. I remember having to take a jar full of coins I had from emptying my pockets of change from one of my past jobs, as a server. I took it to one of those coin counters in my grocery store in order to buy groceries for he and I one week. It was all the money I had.

As I searched for a teacher job, I scraped by working as a substitute teacher in the meantime. I also heard from an old friend whom I'd worked in the past. He needed a solid server at his restaurant, which I'd worked at before. Business was booming-- would I be interested?

Hell yeah. I was getting evicted from the apartment my son and I lived in. It wasn't necessarily the worst thing. I'd picked the apartment in a hurry after the woman I was married to asked for a divorce at the worst possible time-- as I was fighting another woman over my kid and getting ready for to  student teach, the final step in my journey to become a teacher.

He and I had toughed it out there. Because of all the one-way streets in the neighborhood, in order to get to our home we had to drive by an open drug market, with gang members out in front of the building hawking their wares. I was glad he was 4 and too young to realize what was going on. At night, there was gunfire. I kept music or the television on so that he wouldn't hear it.

We made the best of our poverty. At the time, you could ride the CTA, Chicago's mass transit system, for $1.50. For twenty five cents more, you could get a transfer, which was good for 3 hours and could also be used for a round-trip. Kids rode free. On some Saturdays, we would board the el at the station about a block from our home, and ride it to the end of the line, O'Hare Airport,  and hang out for an hour or so. This was pre-9/11, so we could go right into the terminal where the planes were. There was a playground in it, which he loved. He also enjoyed going up to the windows and waving to the pilots who were waiting for passengers to embark or disembark. They would unfailingly wave cheerfully back to him. It's funny now because he cites this as one of the funnest things he did as a child. I did it because I knew he loved airplanes and no matter how broke I was, I could always scrounge up $1.75, even if it was by rummaging through my apartment.

One day, right before I started my second job, as a server, we were in the grocery store near our apartment and he suddenly got very excited; "Dad! It's Tommy! Can I get Tommy?"

I knew that it was a character from a children's show-- "Rugrats." It was in a close-out bin for maybe 4 bucks. I had just enough to buy us 8 or 10 dollars worth of groceries, which I could stretch out for a week, and not enough for this inexpensive toy.  He rarely asked for specific toys. Trying to hide my embarrassment, I told him that we couldn't get it. When he asked why, I could not figure out a way to explain it to him. He was upset. I told him that maybe we could get it later. I knew this was unlikely; it was the only one in the bin, in a very busy grocery store. It would undoubtedly be gone by the end of the day. I hoped he would just forget about it.

A day or two later, I started working again for my old friend. I'd worked for years at the restaurant before I went back to school. Old regulars and I were delighted to see one another. People knew that I'd just finished teacher school, and some knew about my custody fight. They were generous with their tips.

I worked as a sub the next day, and after work went to buy groceries. It was a huge relief to have, for the first time in months, money to buy plenty of groceries, and even a couple of little treats for my son and I.

As I walked into the grocery store, I happened to walk by the sale bin. I was in disbelief. There was Tommy. I quickly grabbed him and threw him in my basket, thankful for this unlikely turn of events.

My son was, of course, later surprised and delighted to see Tommy.

As my son got older, he started asking questions about that time and our circumstances. He ultimately began to understand what had happened, and how my poverty was the price I paid in order to keep him in my life. For his part, he remembers this as one of the happiest parts of his childhood. He still remembers those trips to the airport with delight.

Over time, Tommy, toy cars and Lincoln Logs gave way to baseball, Monopoly and video games, but he always had Tommy on a shelf in his room, even after other things of his childhood had gone to younger neighbors or Goodwill. I think that it was a reminder of that time that was improbably happy for him. With our move right after I finished with one more career change,  nursing school, and right before he started college, Tommy finally went into storage.

These days, I'm happy with decisions I made. One was the decision, over 20 years ago, to stay in my son's life, no matter the cost. The other was the decision a few years ago to go to nursing school . I chuckle sometimes thinking that as a consequence, I'm able to spend more annually on his education than I made in a couple of those harsh years.

Pretty soon, Tommy will be going into the Goodwill bin, where he will eventually hopefully help some other young, struggling parent make their kid happy for a couple of bucks. But before that, I had to stop one more time and remember those times, and be thankful for timely little miracles.
Posted by Johnny Yen at 7:42 PM 5 comments: