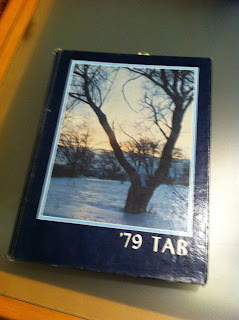 I had a horrible time at the beginning of high school. My family had moved from the city to the suburbs and I could not get used to life there. In the city, I'd had friends from diverse ethnic and religious backgrounds. I'd had friends, period-- I just couldn't seem to mesh with people who seemed obsessed with possessions and status, had known one another since birth-- and were 100% white.

My sophomore year, I decided to make some changes. I lost weight, started running and lifting weights, and I finally started making friends. One of the ones I'm most fond of looking back was Pete V.

Pete and I met in English class. I think he sat in front of me. He was a gregarious and kind Italian-American guy who participated in all kinds of music-related activities. I looked forward to my English class when I could chat with Pete. After a few years of real hell, I was happy to have a guy who I could talk and laugh with.

Over the course of my sophomore year, I started making other friends. But Pete and I made a promise. We had read the O Henry short story "After Twenty Years" in class. The story was about two friends who make a pact to meet 20 years from that day in a spot in a city. We made a deal that we'd do that; I even had the date written down and kept in a safe place, which I continued to do for years.

In the next couple of years, he and I made other friends and saw less of one another, since we never had another class together again. We always said hello in the halls whenever we saw one another in our high school of 5,000 students.

We graduated and moved on in life. I went to a small school for a year, left college and worked for a year, then went to a state school. In the late nineties, I went back to school and got a teaching certification. And in 1999, I went to my 20th high school reunion. He was there. I stopped and chatted with him, and wondered if he remembered our pact. It wasn't the exact date, but I'd hoped to run into him there, and was very happy I did. He seemed to be doing well.

A couple of years ago, another high school friend "friended" me on a very popular social media site. Pete must have seen me through that and friended me. Within a couple of days, though, I saw that he had a lot of very conservative political stuff on there. It's no secret that my politics are pretty liberal. I quietly unfriended him; I didn't wish to start anything up with him.

A few weeks ago, through the same friend we'd originally reacquainted ourselves with, he and I started chatting on the social media site. He remembered that he had connected with me, and I explained why. He assured me that even though our politics were very different, he would always respect me and my views. And then he told me some things that stunned me.

His father had been a horrible, raging alcoholic. His household had always been in tumult. School, the activities-- and our friendship-- had been what had carried him through that time. I had no idea; he had needed me as much as I had needed him.

I refriended Pete, and will never again be out of touch with him. Like the characters in "After Twenty Years," our lives took very different paths. In the end, we met up again, not in front of a shuttered store, like the characters in the story, but on the internet. And happily, neither of us were career criminals...