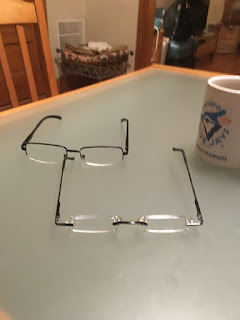 Back in 2007, right before I started taking the prerequisites for the nursing program that I would attend a couple of years later, I got myself some new glasses and contacts.

The optometrist told me something I'd suspected already: that I would need bifocals. I was 46, so I was not very surprised. My parents had gotten them in their forties as well.

Besides the glasses (lines-free progressives-- I paid thirty bucks extra for my vanity), I got contact lenses, which I had worn on and off most of my adult life. The optometrist and I discussed options. One was bifocal contact lenses-- basically, one contact was for long distances, the other for reading. Sounded like a guaranteed headache. The other, she said, was to get regular contact lenses, and buy some over-the-counter reading glasses-- "cheaters." She told me to get the very lowest power that I could read with.

After buying a few different pairs, I ended up with a set of three from Costco that were the second-lowest power they made. These served me well for a long time-- it's been nearly nine years since I purchased them. Over time, one broke and another disappeared. The ones in the foreground of the picture are the survivors of the set.

Over time, I've come to wear my contacts only in social situations. My job has the risk of flying bodily fluids-- specifically, blood-- and so I wanted the eye protection that glasses gave me. And it was not very practical to be taking my cheaters on and off all day. During one of those social situations a few weeks ago-- dinner out with my wife-- I realized that I was really struggling see the menu. It was time to get stronger cheaters.

This morning, I popped my contact lenses in for a distinctly non-social situation-- running my errands on the only day off I have this week. I went to Costco again, and again bought a set of three. My first set had been +1.50. The ones that worked this time were +2.50.

Posted by Johnny Yen at 7:10 PM 2 comments: Links to this post