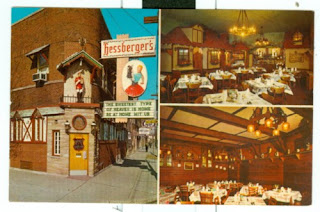 I think I've mentioned this before-- the movie Groundhog's Day has a local connection-- it's only a few blocks from where I live. Most of it was filmed in the town of Woodstock, Illinois, a town that is about 50 miles north of Chicago. However, the scene in which he saves the life of the town's mayor, who is choking in a restaurant, was filmed at a German restaurant that is gone now, Hessberger's, at Lincoln and Cullom Avenues in Chicago. This is how it looked then. 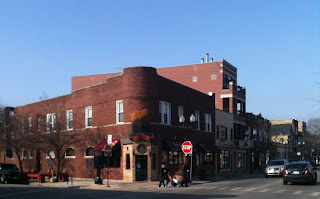 I happened to pass by it today while running errands. It's now a popular restaurant/bar called The Bad Apple that has a great beer selection, and from what people have told me, good food. I've only been there a couple of times for drinks. When I was still in nursing school, and we were still in our old place, I used to walk or bicycle past it on the way to and from work 4 or 5 times a week.

It was recently the 20th anniversary of the release of the movie Groundhog Day. Though I like Harold Ramis, the director, and the actor Bill Murray, it's not one of my favorite movies, though I like the message-- that sometimes we have to keep doing it over and over again before we get it right. It has a personal ring for me lately-- although I'm not too happy with my current job, I do love my profession, nursing.

Tonight, I was texting with my buddy Brent and discovered that he had an interview offer in a telemetry unit. He was going to pass on the interview and I talked him into going to it-- and taking the job if it's offered. It's a step up-- it'll increase his skill set and get him ready to do anything-- being a regular floor nurse, ER, ICU, etc. It also reinforced my decision to start looking for another job.
Posted by Johnny Yen at 10:05 PM

Living on the west coast for most of my life, I've never heard much at all about groundhog day out here. People don't really pay attention to it.
Looking for another job?