The Snows of Kilamanjaro

When I was a freshman in college, in 1979, I had to read Hemingway's "The Snows of Kilamanjaro" for an English class. To be honest, the book made no impact with me. The random flow of the narrator's memories as he dies didn't register with me.

A few months ago, I was revisiting the story in my head, and realized that I now get, at the age of 52, what I didn't get when I was 18.

Twenty years ago this summer, I got the news that I was going to become a parent. It was not expected-- I had broken off a relationship with the woman a few weeks before-- nor particularly desired. I felt like I would be a shitty parent, and I had other plans. In fact, I had planned to spent that summer, the summer of 1993, working only one job (I usually worked 2) and try to figure out the next couple of steps in my life.

Back in my younger days, I used to hang out at the Gingerman Tavern here in Chicago with a guy named Michael. He was one of the nicest and most interesting people I've met in my life. He used to have a tagline on his email, one that's been attributed to a number of people, "Do you want to make God laugh? Tell him your plans." Truer words were never spoken. The following spring, in 1994, my son was born. I took to parenthood like a fish to water. I just fell in love with parenting, and in particular, this little pip of a guy who was now my responsibility for at least 18 years.

I ended up splitting with his mother, but shared custody of him. I was married and divorced twice, and finally tried marriage a third time, this time with a woman who already had a child. My stepdaughter and I hit it off pretty quickly, partly because her birth father doesn't seem to quite get the hang of parenting. 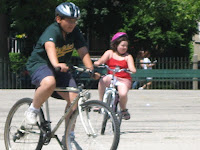 My son is home for his summer break from college for a few more days. My daughter is on a college tour today with my wife. It really hit me this morning-- our journey raising children is nearly done.

I had the realization recently that I now get Hemingway's book. There are a million little memories from a lifetime that come flooding back with a moment's reflection.

The picture to the right, of my kids riding bicycles together is one of them. I've done a lot of things in my life, good and bad. I've gotten four college degrees, loved some wonderful women, made some great friendships-- but one of the most important things I think I've ever done is taught two kids how to ride a bicycle.

I'll never forget seeing my son take his first steps. It was at a party we had for his first birthday. I was still living with his mother; both families were at the party. For a couple of weeks, he'd been walking holding onto furniture. He was sitting in the middle of the living room, when he suddenly stood up and walked over to one of his grandmothers (I cannot, for the life of me, remember if it was her mother or mine).

I got my stepdaughter when she was 8, so I missed the first words, first steps, etc. Our first moment, when we realized that we were going to get on just fine, was, ironically, when I was dropping her off for a visit with her birth father. I had my Ipod plugged into the car stereo, and the Ramones' "I Wanna Be Sedated" came on. She waited a minute before she went into her father's house in order to sing the song along with me; it was one of her favorites, and mine. Another time, when I was picking her up from school, Jim Carroll's song "People Who Died" came up on the shuffle. We sang along to it then, and always do when it comes up on either of our Ipods or on satellite radio. We're just sentimental that way...

Other moments from a couple of childhoods that are stored in my memory: my son walking around with an enormous stuffed "Jimmy Neutron."  My daughter asking about the possibility bats flying out of a lighting fixture in her bedroom. My son spending the better part of an afternoon looking for secret passageways in our home. Taking both of them to see Ursula Bielski, who writes about Chicago ghost stories. My son's Little League games. Every play I've seen my daughter perform in. Dozens of Monopoly and Settlers of Catan games.

But beyond the big stuff, there are a thousand little memories with each of them. As I've watched them grow into intelligent, capable and interesting adults, I've come to realize that they'll remember bits and pieces of their childhoods, but a lot of it will be locked up solely in the recesses of my memory. And when I take my leave, those memories will go away with me. Like with Hemingway's adventurer in the book, those memories will pass like ghosts before me until they and I fade. Such is the ephemeral, sad and beautiful truth of our existence.
Posted by Johnny Yen at 8:12 PM

This was beautiful JY.

I wonder about the dream memories. Maybe they do go on. Maybe that's what happens when we release the mortal coil. At least that's the way it seemed when I was in a certain altered state involved certain substances possibly from as far away as Thailand. Floating around the universe in the mind's eye, remembering the little images.

Our brains really are amazing things. Sometimes when I'm really relaxed these little images and memories just fly around in my head. I think it's a good thing to share those things, especially with your kids. That way they won't die when we do.

it has been forever since I have though about looking at blogs. But I have the itch to write again and was thinking about writing a quick post. I looked at this first and I was struck that I am in a reflective mode about my life, recently divorced with custody of two high school kids. Moments from the past are constantly popping into my head. Thanks for sharing.