It's the day of the home opener for the Chicago Cubs. And of course, the weather has obliged-- it's cold, and there was a dusting of snow this morning. We've had opening day snowed out in previous years.

The Cubs have had some great hitters in their past-- Ernie Banks, Billy Williams, Dave Kingman, Andre Dawson, Rick Monday... it's a long list. One of their greatest hitters got his best shot in last year during one of the Cubs/White Sox interleague games against the White Sox' arrogant jerk catcher, A.J. Pierzynski, who'd deliberately run into him, though he did not have the ball. I'm talking about Cubs catcher Michael Barrett. 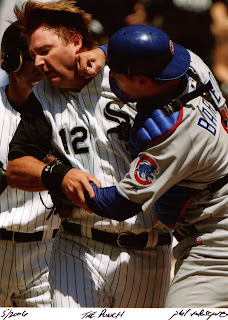 This shot was taken by a friend of Kim's and mine, Phil Velasquez, who's a photographer for the Chicago Tribune.
Posted by Johnny Yen at 10:52 AM

My ex was from a Sox family. He grew up in Westchester, but his dad grew up near Midway somewhere. However, before the divorce my ex went to *his first* Cubs game (born and raised in Chicago?) and took my son. Our friend's son even caught a ball! I hope my son remembers it. I'll have to ask him tonight.

Wrigley Field and The Museum of Sci & Ind. are things I miss about Chicago. The weather - notsomuch.

You were in Seattle and you didn't come to Victoria? Next time.

I saw the Cleveland Indians had to have their games scratched because of the heavy snowfall.

Great picture. Today's one of the few days my daughter didn't make opening day. (She went to Milwaukee yesterday).

A.J. is jerk but since I like both teams I can tolerate him. Gotta love our family gatherings: Daughter is die hard Cubs fan (dog named Cubbie Bear). My brother is a die hard Sox fan that would root for anyone against the Cubs (even the Yankees).

Anyway, I hear Spring is in the air. Here, its snow flurries.

Anon. Blogger-
My son was born and bred on the North side. He was born at Columbus Hospital, just a few blocks from Wrigley (it's closed and has since been made into condos). He's been hooked since he was a baby. He's even said those dreaded words-- "I guess we'll have to wait until next year" (I think he was only six when he said it).

There's no weather like Chicago-- unbearably cold in the winter, unbearably hot in the summer, and unbearably wet in the spring and fall.

And of course, there are really only two seasons in Chicago-- winter and road construction.

Toccata-
I know-- when we went to a tulip festival about 60 miles north of Seattle on Saturday (I'll post about it tonight) we were even closer!

Busterp-
Thanks! Phil signed a couple of copies for us. He's a great guy.

He told us the whole story-- apparently all the photographers saw it coming when Barrett yelled "I didn't have the ball, b*tch!"

They made Barrett make nice and make up, but he's a folk hero on the north side now.

I used to be okay with both teams, but I had one too many yuppie White Sox fans claim that all the Cubs fans are yuppies.

That's funny about the Yankees. I just checked my voicemail and found out that my son's little league team is the Yankees.

I do not like baseball. I did go to a Boston game once and saw Moe Vaughn hit a homerun. Other wise I find it boring. Give me a fast paced hockey game, UFC fight, or a high school football game.

Cool. It reminds me of hockey.

Barrett was blocking the plate and about to recieve the ball. Nothing about the play warranted Barretts punch.

I'm a Cubs fan, but I can't support Barrett here.

This is the video here.

Binks first practice was tonight. I am still thawing out.

I'm been a slack Braves fan since we lost Glavine. I think we won against him this weekend, though.

Kristi-
Did you see that there is serious talk of banning fighting from hockey? That's crazy-- it's part of the game.

Phil-
Thanks for the link. I guess I'm inclined to support a Cub. And Pyrzeinski is such a dick.

TenS-
Our first is Friday. Looks like it's not going to be any warmer. Those first few practices and games are always an adventure.

Beth-
Yeah, those were the days for the Braves-- both Glavine and Maddux in the rotation!

Yesterday I took off work early because I was feeling blah. I got on the red line at 12:50, good time for cubs fans. The conductor keps saying, let's get on the train and go watch the cubs lose. People were getting rather upset. I actually turned off my headphones just to listen in. So, did they win?

Starting this week? Sissies. We had soccer practice last week when it was below freezing with howling winds. The kids looked like Napoleon retreating from Russia at the end, except with minivans.

Natalie-
They lost, of course. The guy was right. And of course I made it home from work in time to catch the ending on tv.

Deadspot-
You're right-- except that soccer entails actual moving around. Baseball has long periods of standing still.

You've put the picture of Napolean's troops heading west across the devastated Russian landscape in minivans. Thanks.

I don't believe in blindly supporting a team, but I do blindly support the Cubs. I was born in Des Moines, Iowa, and in Iowa we tend to feel like the Cubs are really OUR team. When he was alive, my grandpa rooted for the Cubs, so I've always rooted for the Cubs, too. I love Wrigley Field, I love going to games, and man, I'm sorry I missed opening day. The funny thing is, I don't even care about baseball. I just like to watch the Cubs play and think about old Shorty (my gramps).