Slacking In Seattle on a Very Good Friday 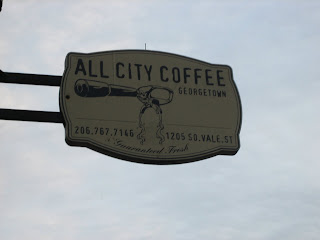 Andreas and I started our day, as always, at All City Coffee. Seattle takes its coffee very seriously, not surprising for the place Starbucks originates. I've finally learned how to offer my plain old midwestern coffee after having difficulty ordering it in Oakland and elsewhere-- what we midwesterners call "a cup of coffee", people on the West coast call "a drip." Now that I've learned to speak the language of West Coast baristas, my visits are a lot less frustrating.

After coffee, we took off to explore the cd stores of the Capitol Hill section of Seattle. I'd been looking for a cd by The Sonics, a legendary Seattle garage rock band that appears on the Nuggets garage rock set no fewer than three times. We finally suceeded-- I found a copy of "Introducing The Sonics," which was actually their third album, and has "The Witch" and a couple other favorites on it.

A big bonus: I found a used cd of "The All-Time Greatest Hits of Roy Orbison." I'd nearly worn my friend Matt's vinyl copy of it in college, and had long ago given up looking for it on cd.

On the way there, we were driving past a hotel and realized that we were surrounded by people in all kinds of weird costumes; it dawned on us that we must be driving past the hotel Geek-fest was being held at. 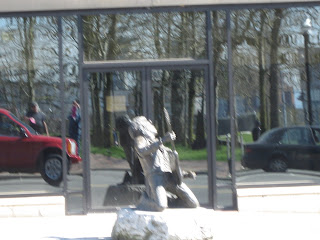 Up in Capitol Hill, we ran into Jimi Hendrix. Hendrix was from here, and the guitar he played at Woodstock is in the Experience Music Project, a rock and roll museum that's at the foot of the Space Needle. One of my next couple of trips, I'm going to bring my son here-- to see the guitar (he's a big Hendrix fan) and just because he'd love this place. 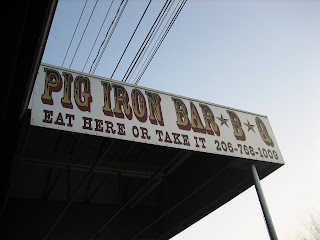 By the time we got back home, his wife Lynn was home. We headed over to the nearby Pig Iron Bar B Q.

I had worked for years at the NN Smokehouse, arguably the best barbecue in Chicago, so I'm dubious when someone raves about a particular barbecue. I'm happy to report that the brisket I had was outstanding. 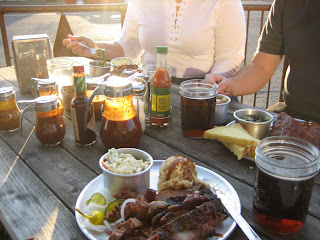 Of course, the company was pretty good too. 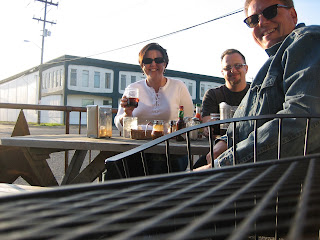 One last great score was a t-shirt I bought in Capitol Hill. It had to do with one of the funniest bits on Saturday Night Live in recent memory. All I can say is that "I got a fever, and the only prescription is MORE COWBELL!" 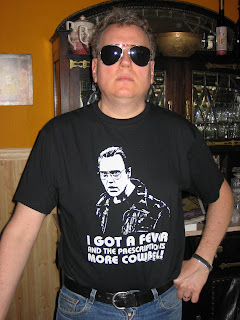 Looks like fun. My best man and his wife moved to Seattle just before Mt St.Helens erupted. He stayed. Really liked it out there.

It's funny; one of the comments on a video I was going to use in my next blog was "more cowbell". (New Order)

Now how on earth did you ever manage to find a coffee shop in Seattle?

That is one of my favorite SNL clips. I love how Will Ferrell works that cow bell out.

I hope you continue to have a great weekend.

O.K., I have an amazing Roy Orbison CD. It was in my mom's cd player when I inherrited her car, and my brother bought it for her, knowing her love for his music. I'll have to see if it is the one you found.

I'm a coffee HO. I will drink any coffee, pretty much - as long as it was brewed that day.... I'm from the midwest. I even accept the brew from the hotel coffee maker... No coffee snobbery here!!!! Yeah, the coffee snob places can put fancy names on it - whatever.

That barbecue looked good too. I'll be hitting Rudy's in San Antonio in June, which is awesome, even if it's mostly beef. Real barbecue should be pork. Was that sweet tea out of a mason jar that I saw on the table, or just regular tea?

Busterp-
It is a wonderful place-- despite a volcanic explosion and the threat of a tsunami, he stayed, and I can totally understand why.

Skyler's Dad-
I'm packing to get ready to go back to Chicago, and won't have time to pot again for a day or two, but a couple of hours ago I was in front of the first-ever Starbuck's.

You should probably be able to find that shirt online.

Danielle-
"I want you to explore the space of the room with the cowbell..."

Anon. Blogger-
It's a great collection. The only curious omission is "Ooby Dooby," which was probably not on there because it was his earliest hit and probably on Sun Records.

I'm the same with coffee. I can't remember who said it-- maybe George Carlin-- if your order for coffee has more than two instructions, you're an asshole ("I want a half-caf/half-decaf mocha latte easy something or other..."

My wife is amused that I will drink coffee brewed earlier in the day that is now cold. My father and I discovered that we both put ice cubes in our coffee so we can drink it sooner.

Erik-
It has been. I finally saw the famous Pike Street fish market, though it was a slow day and not a fish was thrown.

Bubs-
Aren't they great? They were among a trove of treasures the custodian found at the school recently. Apparently the old priest of the church, who is now deceased, loved them-- there were at least a half dozen pairs.

Since I'm allergic to pork, I tend to avoid it-- and I just love brisket. Being allergic to barley (celiac disease) didn't prevent me from partaking in beer, though-- that's Shiner Bock, from Austin, Texas in those jars.

I have also been known to put ice in my coffee to get to is sooner!

Funny, when I was a yuppie in the 80's taking the train into Union Station I bought a large coffee every morning. I sat it down on the floor heater and went right to sleep. I always, always woke up at Western Avenue and drank that puppy down like I was chugging a cold one!

Best coffee memory ever! From a roach coach, no less!!!

Allergic to PORK?!? That sucks! I had no idea there was such a thing as a pork allergy--and you worked in a barbecue place.

Shiner bock is one of my all-time favorite beers, and I plan on drinking a lot of it in June. Last time we were there we went tubing down the Guadalupe River--they rent you an extra tube just to hold your beer cooler (cans only) and we drank plenty of Shiner Bock while floating downstream. It was one of the best white-trashiest things I've ever done.

I think Vikki got Spooney that shirt!

You are looking mean in those pics!

MMMMM coffee, give me yesterdays and I am happy, if it's chewy even better, ice in the hot coffee: instant gratification at it's best.